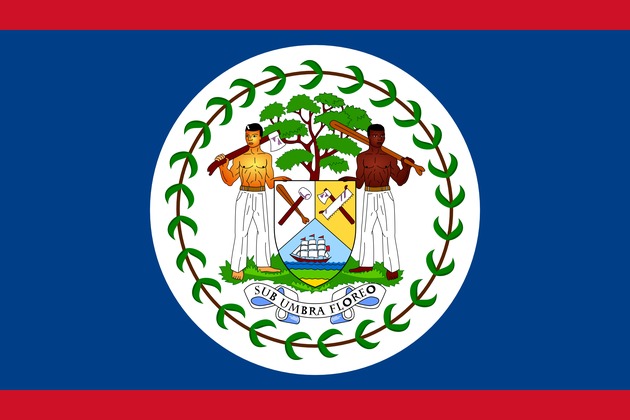 The red, white and blue flag of Belize is a symbol of the unity of our nation. Prior to Independence, the People's United Party (PUP) proposed a blue flag with the Coat of Arms in a white circle. Because of the close association of the flag with the PUP, public opinion was divided as to its suitability to act as a unifying symbol. The United Democratic Party (UDP) did not propose a flag but called for a flag that could rally all citizens, regardless of their political affiliation. As a consequence, the bi-partisan National Symbols Committee invited citizens to submit designs for a National Flag. The design selected by the Committee is a royal blue flag with one horizontal red stripe at the top, one at the bottom, and a white circle with the Coat of Arms in the center.

O. Land of the Free by the Carib Sea,
Our manhood we pledge to thy liberty!
No tyrants here linger, despots must flee
This tranquil haven of democracy
The blood of our sires which hallows the sod,
Brought freedom from slavery oppression’s rod,
By the might of truth and the grace of God,
No longer shall we be hewers of wood.

Arise! ye sons of the Baymen’s clan,
Put on your armour, clear the land!
Drive back the tyrants, let despots flee –
Land of the Free by the Carib Sea!

Nature has blessed thee with wealth untold,
O’er mountains and valleys where prairies roll;
Our fathers, the Baymen, valiant and bold
Drove back the invader; this heritage hold
From proud Rio Hondo to old Sarstoon,
Through coral isle, over blue lagoon;
Keep watch with the angels, the stars and moon;
For freedom comes tomorrow’s noon.

Arise! ye sons of the Baymen’s clan,
Put on your armour, clear the land!
Drive back the tyrants, let despots flee –
Land of the Free by the Carib Sea!

The shield of the Coat of Arms is divided into three sections by a vertical line and an inverted V. The base section represents a ship in full sail on waves of the sea. The two upper sections show tools of the timber industry in Belize: a paddle and a squaring axe in the right section and a saw Supporting the shield are two woodcutters, the one on the right holding a beating axe over his shoulder in his right hand, and the one on the left holding a paddle over his shoulder in his left hand.

Above the shield rises a mahogany tree. Below the shield is the motto scroll. A wreath of leaves encircles the Coat of Arms. The motto says: "Sub Umbra Florero", meaning "Under the shade I flourish." The Coat of Arms embodies an important aspect of the history of Belize, as the mahogany industry formed the basis of our economy in the 18th and 19th centuries.

The Black Orchid (Encyclia Cochleatum) is the National Flower of Belize. This orchid grows on trees in damp areas, and flowers nearly all year round. Its clustered bulblike stems vary in size up to six inches long and carry two or three leaves. The black orchid flower has greenish-yellow petals and sepals with purple blotches near the base. The "lip" (one petal of special construction, which is the flower's showiest) is shaped like a valve of a clamshell (hence the name Encyclia Cochleatum) and is deep purple-brown, almost black, with conspicuous radiating purple veins.

The Mahogany Tree (Swietenia Macrophilla) is one of the magnificent giants of the forest. Rising straight and tall to over a hundred feet from great buttresses at the roots, it emerges above the canopy of the surrounding trees with a crown of large, shining green leaves. In the early months of the year, when the leaves fall and new red-brown growth appears, the tree can be spotted from a great distance.

The tree puts out a great flush of small whitish flowers - the blossom for dark fruits, which are pear-shaped capsules about six inches long. When the fruits mature they split into five valves, freeing large winged seeds which are carried a protection of the forest floor and germinate to begin a new life cycle. The mahogany tree matures in 60 to 80 years.

British settlers exploited the forest for mahogany, beginning around the middle of the 17th century. It was originally exported to the United Kingdom in the form of squared logs, but shipment now consists mainly of sawn lumber.

The Keel-Billed Toucan (Ramphastos Solfurantus) is the National Bird of Belize. It is noted for its great, canoe-shaped bill, brightly colored green, blue, red and orange feathers. The bird is about 20 inches in overall length. It is mostly black with bright yellow cheeks and chest, red under the tail and a distinctive white patch at the base of the tail.

Toucans are found in open areas of the country with large trees. They make a monotonous frog-like croak. Toucans like fruits, and eat by cutting with the serrated edge of their bills. Toucans nest in holes in trees, using natural holes or holes made by woodpeckers, often enlarging the cavity by removing soft, rotten wood. They lay two to four eggs which are incubated by both parents. The nesting stage lasts from six to seven weeks.

The Tapir or Mountain Cow (Tapirello Bairdii) is the largest land mammal of the American tropics. The tapir is a stoutly built animal with short legs, about the size of a donkey and weighs up to 600 pounds. Its general color is dusty brown with a white fringe around the eyes and lips, white tipped ears and occasional white patches of fur on the throat and chest. In spite of its local name, the tapir is not a cow. It is closely related to the horse and is also kin to the rhinoceros. The tapir is a vegetarian. It spends much of its time in water or mud shallows, and is a strong swimmer.

The National Animal is protected under the law thus the hunting of the tapir is illegal.

Almighty and Eternal God, who through Jesus Christ
has revealed Your Glory to all nations, please protect
and preserve Belize, our beloved country.

God of might, wisdom and justice, please assist our
Belizean government and people with your Holy Spirit
of counsel and fortitude.

Let your light of Your divine wisdom direct their plans
and endeavours so that with Your help we may attain
our just objectives. With Your guidance, may all our
endeavours tend to peace, social justice, liberty, national
happiness, the increase of industry, sobriety and useful knowledge.

We pray, O God of Mercy, for all of us that we may be
blessed in the knowledge and sanctified in the
observance of Your most holy law, that we may be
preserved in union and in peace which the world
itself cannot give. And, after enjoying the blessings of
this life, please admit us, dear Lord, to that eternal
reward that You have prepared for those who love You.